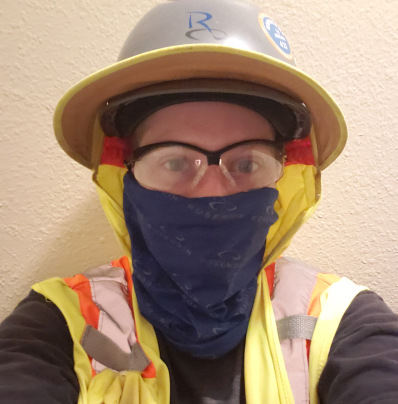 The article can be found on the Working in Austin website, which is operated by the group, Workforce Solutions Capital. In the feature, Leighton talked about her previous job working in the food service industry, living paycheck to paycheck. She eventually came to the realization she needed to make a career change in order to create a prosperous and comfortable life.

Searching for a career in the skilled trades, Leighton originally had her sights set on becoming a plumber. But after taking a Multi-Craft Core Curriculum (MC3) course, Leighton found she favored the electrical trade over all others.

When choosing to pursue a career as an electrician, Leighton was influenced by the quality training and quality benefits. After she visited the IBEW Local 520 training center, she knew in her heart she wanted to join.

The benefits Leighton receives as a Local 520 member are among the best in the building trades unions, she said.

Leighton told Working in Austin that she set both short- and long-term goals for her future in the trade.

Like any apprentice, Leighton is working to complete her apprenticeship and becoming the best electrician she can be. From there, her goals get loftier. She aspires to help more women find careers in the skilled trades, as she has realized the opportunity is there.

IBEW Local 520 Organizer Marc Pendleton agrees. As an apprentice, he said he was taught the trade by a woman.

Leighton wants to help change the belief that women aren’t suitable to work in the trades. She knows that isn’t true and she encourages any woman who is struggling to find a rewarding career to look into the opportunities available in the skilled trades.

Another goal Leighton discussed was starting her own business. She said she wants to pursue a master license and then open a shop to employ other union electricians.

Following more than a year of COVID-19 related cancellations, roadblocks and other difficulties, IBEW Local…

Before the 2020 school year started back up, the International Brotherhood of Electrical Workers Local…